If you’re looking for the best gaming monitor for the PS4 this 2020, then you’ll have to check out this review.

The PS4 is one of the best console gaming machines out there in today’s current market.

Additionally, you’ll need an excellent monitor that you can dominate your opponents with and gain the upper advantage.

So let’s dive deep into some of the best displays that you can use for the PS4. 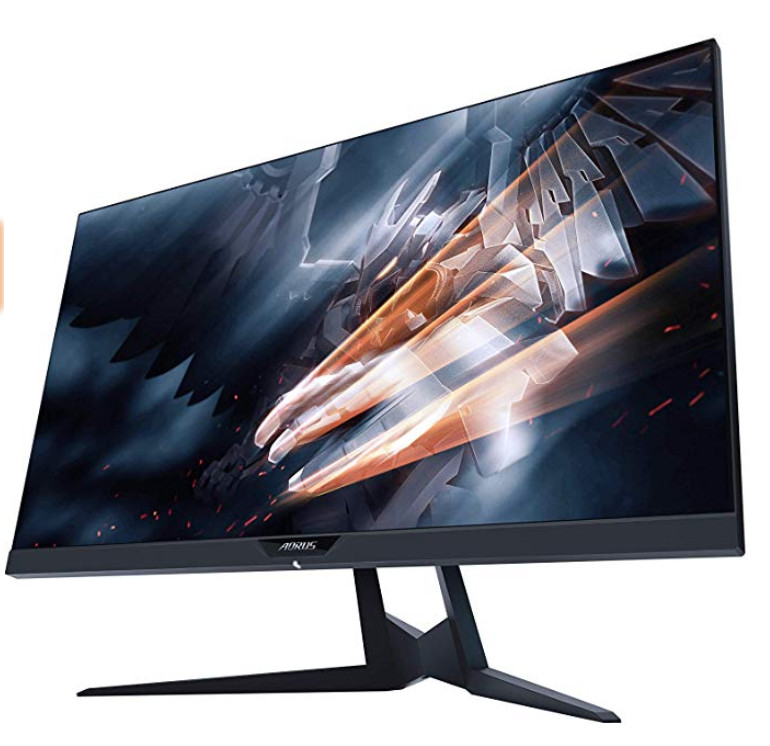 The Aorus AD27QD 27-inch monitor is a bezel-free display and is one of the top IPS panels for PS4 gamers as well to enjoy for years to come and is future proof as well.

With a 144Hz refresh rate and a resolution of 1440 QHD, you’ll have more than enough screen real estate for your PS4 gaming needs, and you’ll be able to have the upper advantage significantly when gaming competitively or leisurely.

Additionally, the display performs very excellently with an sRGB Adobe of 98% coverage, with a brightness level of 400 cd/m^2 and a contrast ratio of 1000:1, which will provide you a wide range of gamut and contrast levels.

In terms of picture quality, the Aorus AD27QD performs well, and you’ll be able to see the rich darks and brilliant lights as well during dark or light sceneries.

When opening the Aorus AD27QD out of the box, you won’t need to calibrate the monitor as much because it’ll already provide you an already default optimized settings, to begin with.

And the 144Hz refresh rate is what you’ll need if you’re gaming competitively because there won’t be screen-tearing nor ghosting when gaming during fast-paced action scenes.

Also, the design has a beautiful matte-black overall design to the frame, and the display is bezel-free, which adds to the level of immersion.

The Aorus AD27QD display is FreeSync compatible with a range of 48Hz and 144Hz and works well with the PS4. Also, the display is also G-Sync certified as well if you do plan on using the display for PC gaming purposes.

Overall the Aorus AD27QD monitor feels solid and comes with state of the art feel to the overall design. 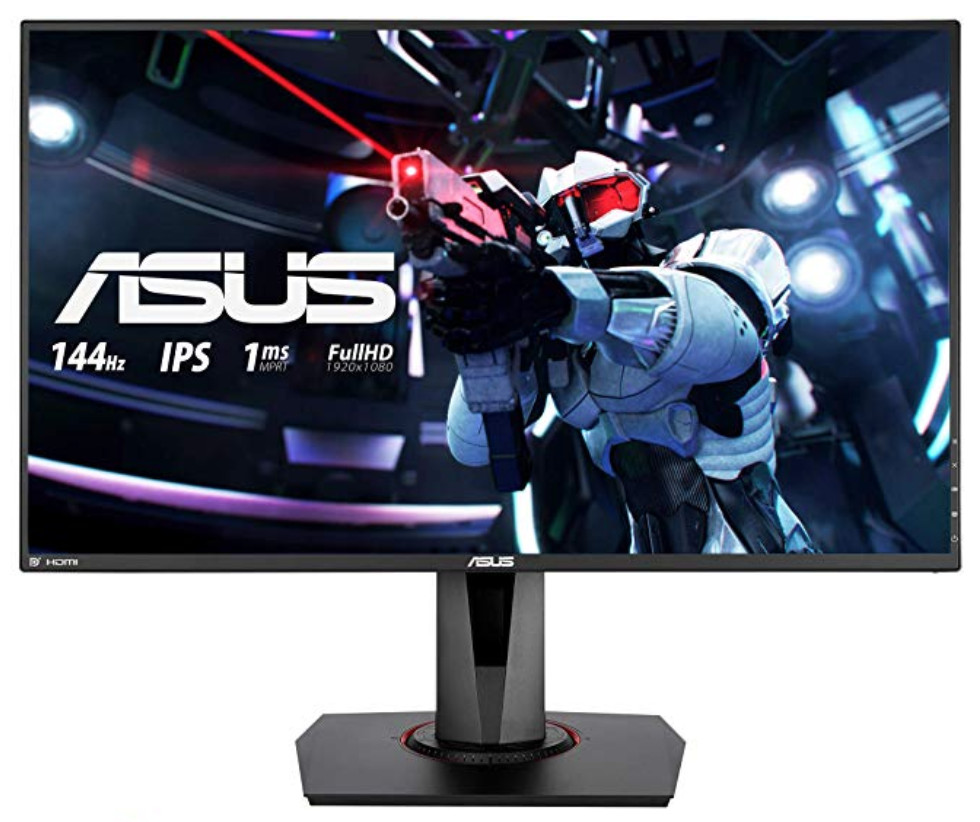 The ASUS VG279Q monitor is a true gaming monitor that you can use to game with your PS4, other gaming consoles, and PC gaming as well.

With its beautiful aesthetics, the overall design feels state of the art and has a nice matte-black texture to the whole display.

And the bezels are designed very thin enough that you can still fully immerse yourself into your gaming moments.

The ASUS VG279Q is an IPS panel with a 1920×1080 resolution, running a 144Hz refresh rate and a 3ms response time, which is excellent enough for casual and competitive gameplay. During gameplay, there was no present of ghosting nor trailing.

With a 1080 resolution, you’ll be able to max out your game settings and still have great frame rates, with smooth gameplay as well.

Also, the ASUS VG279Q is FreeSync ready and is also G-Sync certified as well if you do plan on PC gaming with an Nvidia graphics card.

The ASUS VG279Q has a backlight of 400 cd/m² and a contrast level of 1000:1, which will give you a plethora of gamut and contrasts, which is excellent for gaming.

Additionally, there was a bit of backlight bleeding present in the corners of the display, but it wasn’t very significant and is quite normal for an IPS.

If you’re an editor, the monitor has a 99% sRGB coverage, and the display will give you accurate colors. And this is great if you’re also a creative and a producer.

The stock stand is ergonomically design and very stable, thanks to its bases great foundation. You’ll be able to tilt, swivel, pivot, and rotate the display to your preference. And you’ll be able to opt-in for a VESA mount if you’re not fully satisfied with the default stand.

The monitor has a balanced screen uniformity, and the overall colors are balanced when gaming. If you’re a producer and a creative, the SRGB coverage makes the ASUS VG279Q display ideal for photo and video editing as well.

To conclude, the ASUS VG279Q is an impressive gaming monitor, being an IPS panel, you’ll have superb color accuracy and also comes with a fast 144Hz refresh rate with a 5ms response time, which is awesome for competitive gaming and runs perfectly with the PS4. 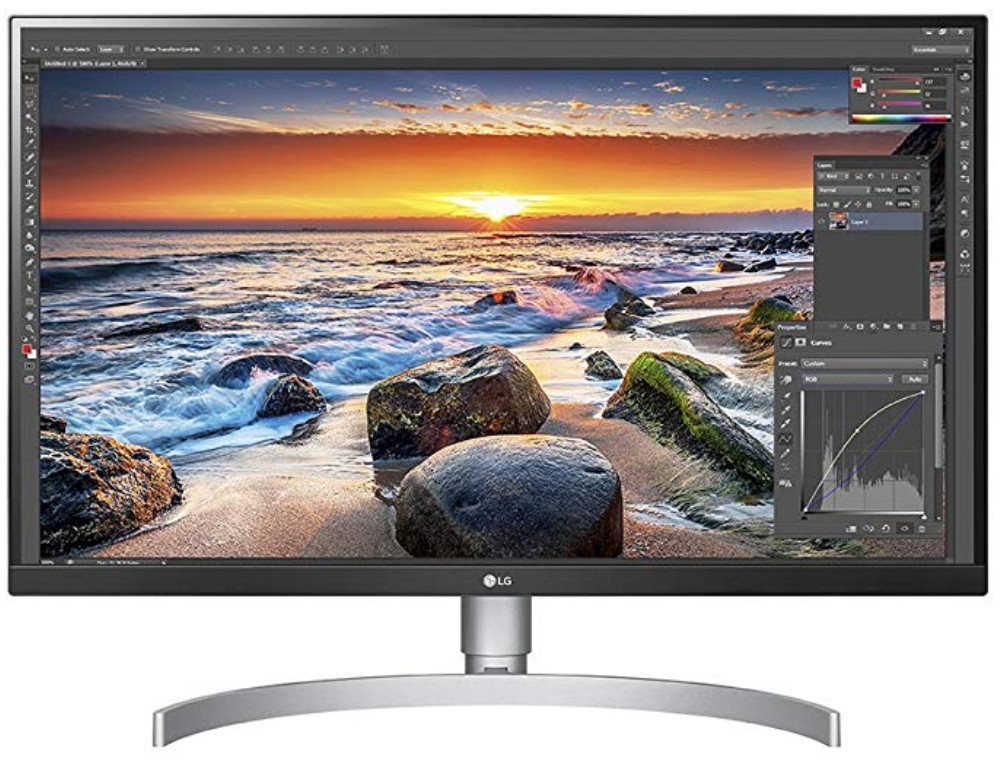 Has 60hz refresh rate and a response time of 5ms, may cause a bit of ghosting and trailing during fast-paced scenes

The LG 27UK850-W display is another state of the art monitor that you can use to game with, with your PS4 gaming console.

It’s not bezel-free, but the bezels are thin enough for you to have increased levels of gameplay immersion still.

Additionally, the LG 27UK850-W is a 4K monitor and is an IPS panel with elegant and accurate colors straight out from the box.

The display works well when gaming with the PS4 and will have you immersed with its accurate and lifelike colors.

The LG 27UK850-W also has a USB-C port, which you can use to charge up your MacBook Pro laptops in case if you do have a MacBook Pro.

Along with an excellent USB-C port, you’ll have an ergonomic stock stand that lets you tilt, swivel, pivot, and rotate the display to your desired need.

During PS4 gameplays, the pixels were right-on responsive, and the color uniformity is on point as well. However, there was a bit of ghosting and trailing, but not in a very significant way.

Additionally, the LG 27UK850-W is also FreeSync enabled, and also G-Sync certified for users with Nvidia graphics cards. When FreeSync is activated, it runs very smoothly when gaming on the PS4 gaming console.

Also, the Performance is superb thanks to its lifelike and color accuracy and the display being an IPS panel and is excellent when gaming on the PS4, and for PC gaming. 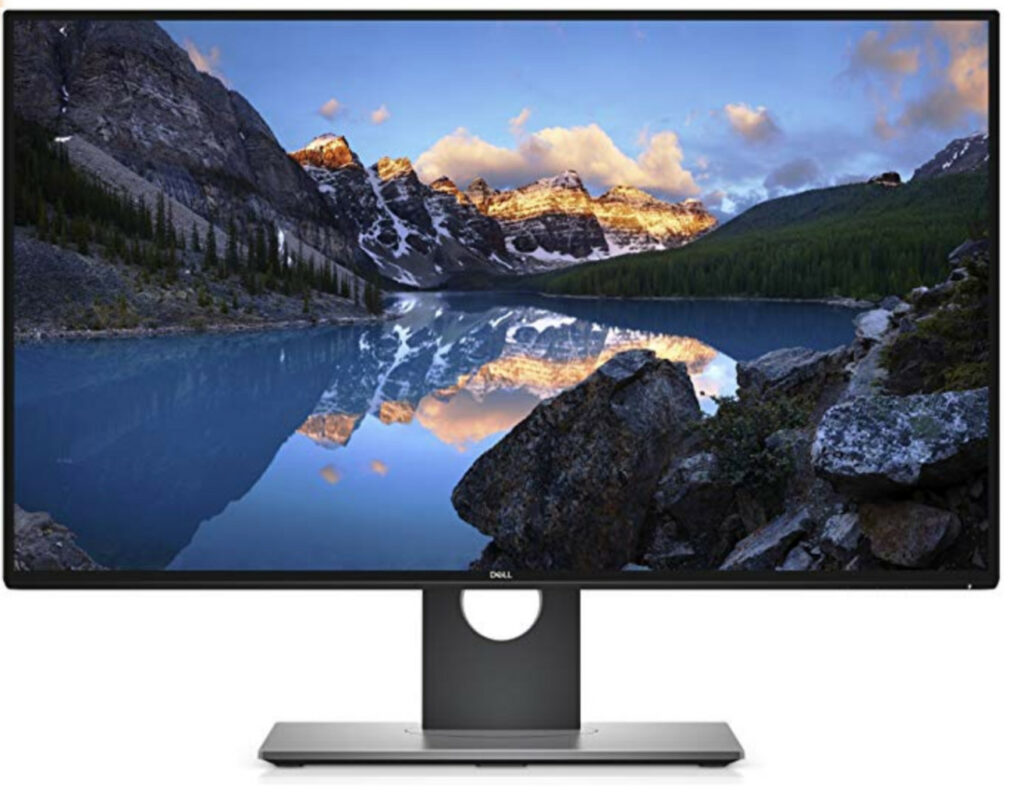 The Dell U2718Q monitor is another impressive display if you’re gaming with the PS4.

Because with the HDR 10 feature added as well, HDR 10 will automatically be enabled when gaming with the PS4, and you’ll be able to fully experience and immerse yourself with the impressive color depth and a boost in quality in contrast.

With the Dell U2718Q monitors affordable price tag, the Dell U2718Q runs a 3840 x 2160 resolution with 4K UHD feature, running with a refresh rate of 60Hz and a 6ms response time, which are pretty decent for console gaming.

Also, if you’re a creative and a producer as well, you’ll greatly benefit from the 99.9% sRGB coverage as well, which is great if you’re doing any video and photo editing work.

The stand is also ergonomically designed well, and you’ll be able to tilt, adjust its height, swivel, and pivot the display to your preference.

Unfortunately, the Dell U2718Q monitor doesn’t support FreeSync, nor G-Sync, but with the 4K feature, you’ll be able to run smoother gameplays with stutter-free graphics.

Overall the Dell U2718Q is an excellent choice if you’re also a producer and a creative due to its SRGB coverage. But the lower refresh rate and 5ms response time make the Dell U2718Q great for casual gaming but not the ideal monitor for competitive gameplay. 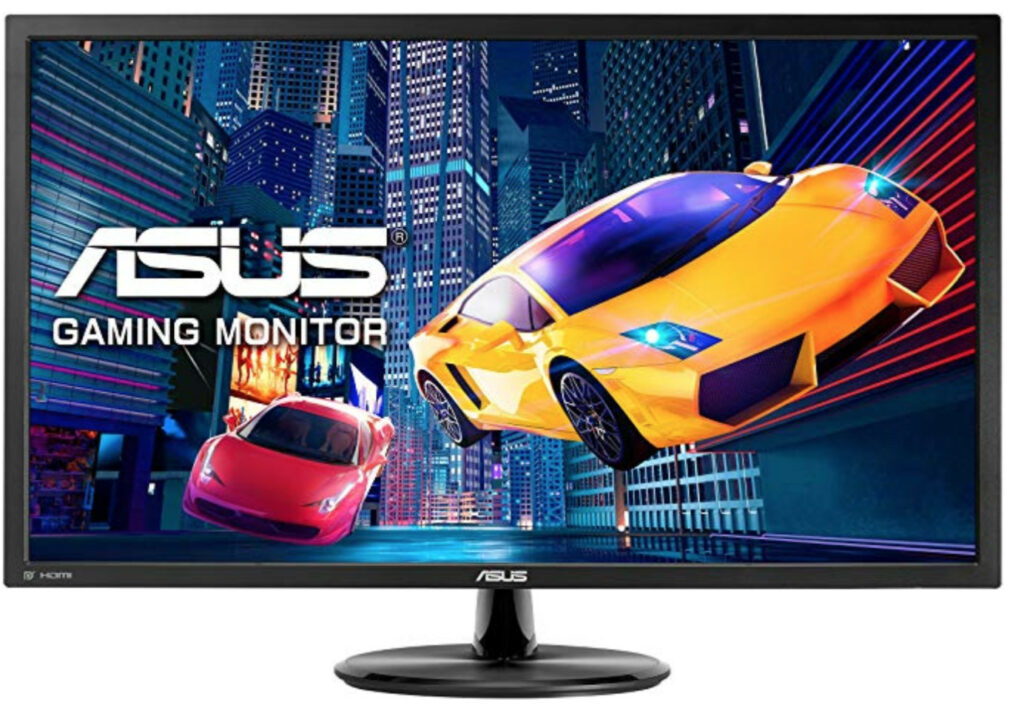 The Asus VP28UQG is a 28-inch TN panel with a 60hz refresh rate and a fast 1ms response time.

The quick response time is ideal when gaming during fast-paced action scenes or in FPS games because there won’t be any ghosting nor motion trailing present, which makes it perfect for PS4 and console gaming overall.

The display also comes with a 4K HDMI port if you decide to use the 4K feature. When 4K is on, the viewing experience is much better, especially when gaming and watching films.

The TN type panel will give you the quickest Performance out of the other two IPS and VA panels. However, when viewing the screen from different angles and sides, the images tend to disappear, and the colors may fade as well.

Additionally, the display has a resolution of 3840×2160 UHD, which gives you crisp and a big enough screen real estate for you to be fully immersed in the gaming moment. Also, the pixel density is great and will give you a crispier look at all images.

The monitor also has FreeSync enabled as well, which can run from 40 to 60Hz. The monitor is G-Sync certified if you do decide to PC game.

The display is elegantly designed well, with a stable stand. However, the stand can only tilt, but you can always opt-in for a 100x100mm VESA mount if you’re not entirely with the default stand.

The monitor has medium-sized bezels, but you’ll still be able to immerse yourself into your display experience fully.

The Asus VP28UQG display is an overall excellent gaming monitor, especially for PS4 and console gaming in general. Thanks to its TN panel and a quick 1ms response time, FPS gaming and action games run buttery smooth. 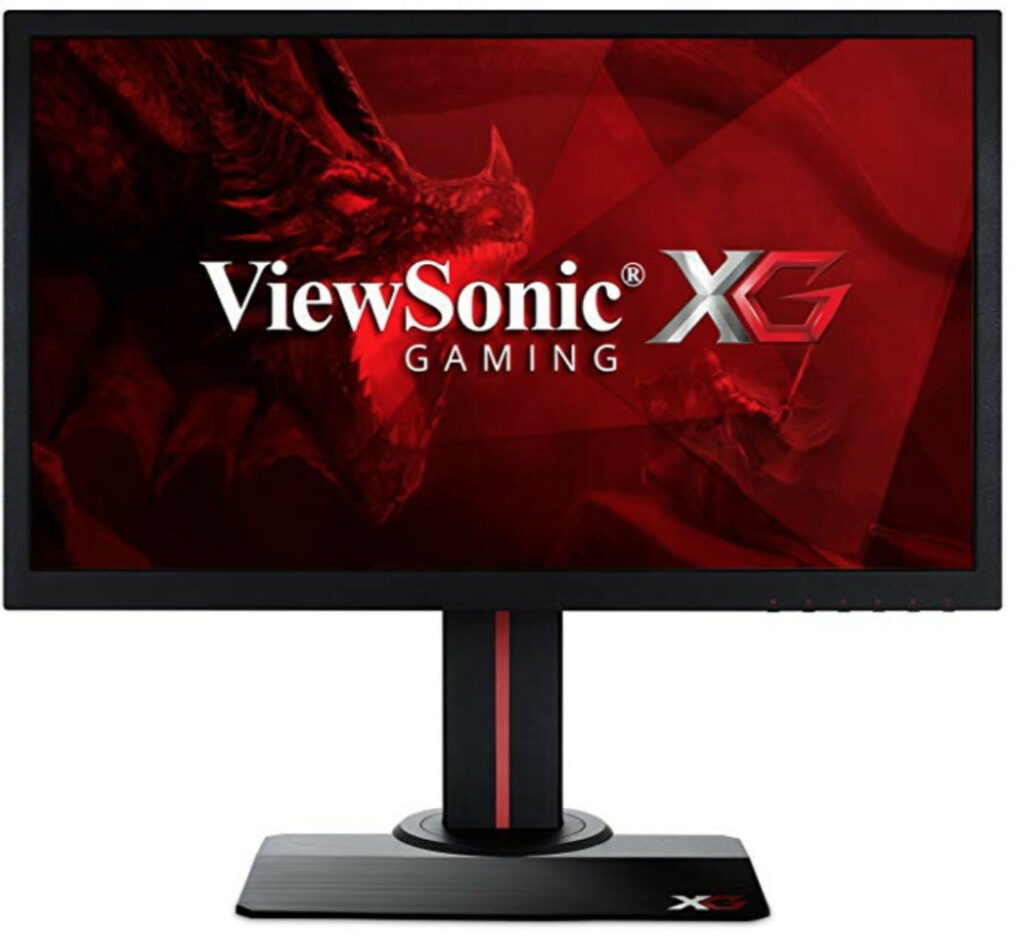 The VIEWSONIC XG2402 is an excellent console gaming monitor, with aesthetics which packs the Performance as well.

Additionally, the monitor is a TN panel, with a 144Hz refresh rate and a 1ms response time, which makes the monitor perfect for competitive gaming.

The fast refresh rate and quick response time will allow you to experience super smooth buttery-like gameplay. And no ghosting and motion were trailing present as well.

And there was no backlight bleeding present, and nor dead pixels, which was pretty awesome in general.

Also, the stand is ergonomically well designed and can pivot, swivel, rotate, and adjust in height.

Additionally, the VIEWSONIC XG2402 has a 98% SRGB coverage making color accuracy great when gaming. And if you’re a producer, the 98% SRGB will be ideal if you’re editing videos and editing photos.

Overall the VIEWSONIC XG2402 is geared towards quick Performance and speed, making the display perfectly suitable for competitive and FPS gaming.

And with its Performance and price range combined, the VIEWSONIC XG2402 display is the ideal monitor if you’re on a budget.

Those are some of the top gaming monitors that you can use to game with your PS4 and for your other console gaming needs.

Hopefully, this list can help you better choose the right gaming display that increases your PS4 gaming experience.