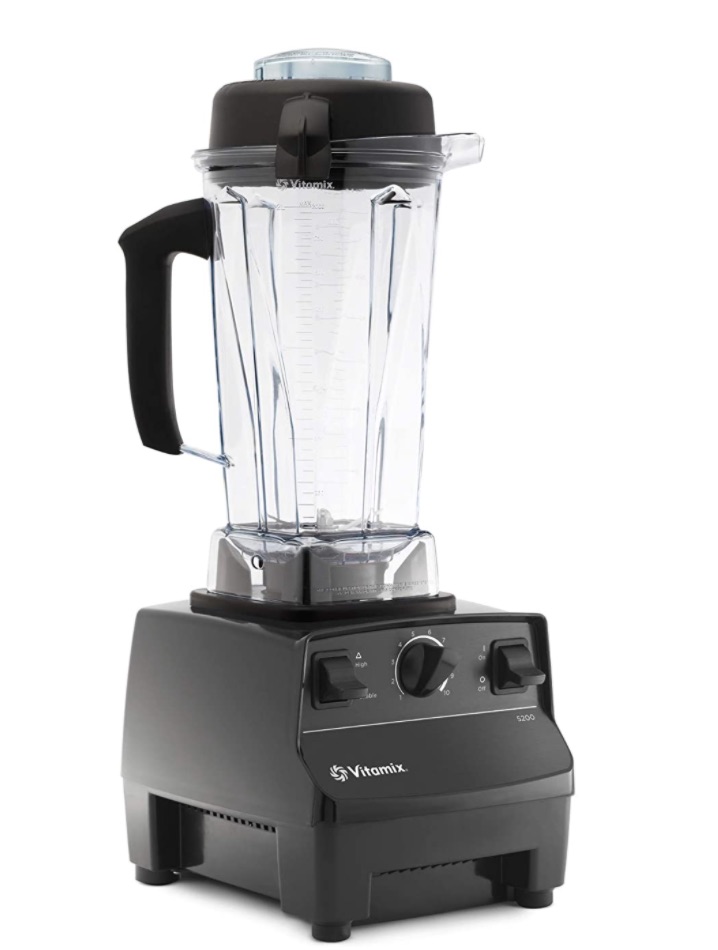 The Vitamix 5200 blender is considered a state of the art professional-grade blender that can make smooth smoothies.

In addition, the Vitamix 5200 has a $100 price range difference compared to the Vitamix E310. The significant difference between the two is its container size.

With its full size 64 ounce container, the blender itself can serve a large family gathering, or if you have friends that you’ve invited into your house, the Vitamix 5200 blender will do the job.

So before investing in the Vitamix 5200, let’s dive into its performance features and with the blender can do for you.

The blender will include the blender itself, a cookbook, a manual, the 64-ounce container, and the tamper.

The blender also comes with a thick, 6-foot power cable, which is more than enough to reach your outlet in your kitchen.

The blender itself and the design are pretty large and bulky, so you’ll have to clear out some space in your cabinet or your storage.

The build quality of the blender itself is aesthetically pleasing, and it feels like a state of the art blender. Thanks to its high-quality metal and plastic material, the blender is built on a solid foundation and feels strong.

First, the container is pretty tall, which can hold up to 64-ounces and create smoothies and beverages for full family size. And it’s also great for parties and large gatherings.

The material is also BPA free which is also great and is outstanding in terms of health.

The container lid is also high quality, all you have to do is seal the container with the top, and it’ll lock into place.

The top portion of the lid also has a mini removable cover, which you can add any additional ingredients, foods, beverages, veggies, or fruits during the blending process.

Quality Blades That Blends Through Anything

Additionally, the blender has four sharp stainless steel blades, which are outstanding when blending fruits, veggies, and ice. The blades are also aircraft-grade, which means high-quality.

However, you’ll have to be careful when washing the blades and the container itself because the blades aren’t removable.

The blender’s performance is excellent and performs well, along with its ten speeds that you can choose from. The blender can go from 1400 RPM to 22,500 RPM’s, which makes blending and slicing fruits, veggies, and foods altogether in general, very well.

Also, the blender sound is not too noisy; however, the noise is very significant if you blend into the max speeds.

Additionally, the blender is excellent in crushing and blending ice as well. However, for other VitaMix models, such as the 7500, you could also use the Pulse mode feature, which is specifically designed to blend thick ice.

The blender is also great for making baby foods because it’ll precisely liquefy the foods, specifically for babies.

Overall the Vitamix 5200 is excellent to blend fruits and veggies altogether. Resulting in a smoother smoothie, and the time rate to blend any types of food will be less than one minute.

What’s great about the Vitamix 5200 is that it has a self-cleaning mechanism. All you have to do is pour some warm water and drip a little bit of dishwashing soap, and it’ll take about 30 to 60 seconds to clean the blender container thoroughly.

The blender also has seven-year full warranty coverage, which is very convenient and great if your blender breaks down or parts of the pieces are missing, the company can easily replace it.

The blender itself doesn’t have too many features; however, it has a Hot Blending feature, which you can use if you want to make soups because it’s specifically designed to blend soups and other foods along with it.

The VitaMix 5200 is a full-size blender, which holds 64 ounces. Overall it is a great blender to create smoothies for large gatherings and large family gatherings as well.

However, compared to other blenders, the 5200 doesn’t have many features, but the blender will offer you 10-speeds, which you can use easily by adjusting the knob.

Overall the blender can create smooth smoothies, crush the ice with quality, and in general, create buttery smooth liquids.