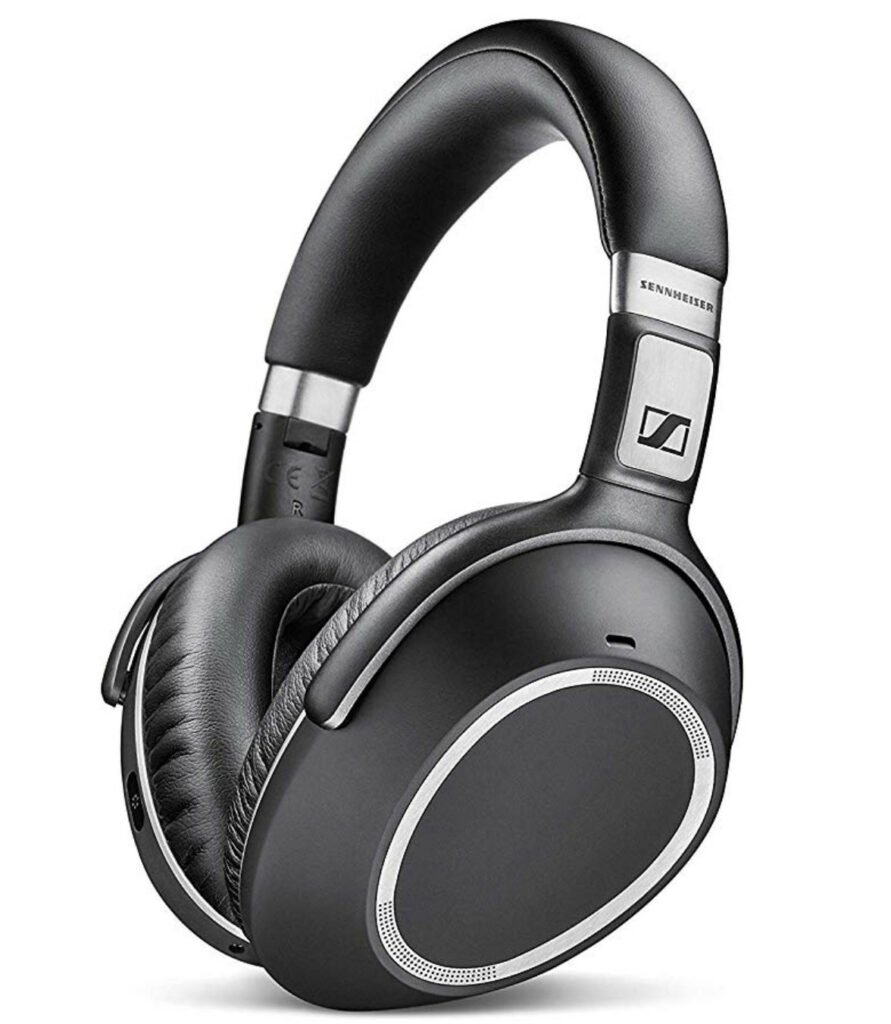 If you’re looking for an active noise canceling headphone, then you’ll need to check out this Sennheiser PXC 550 review.

These headphones are pretty much a state of the art design, which can provide you the crisp, clear, and immersive quality that brings goodness into your ears. If you’re also a gamer, then the 550’s easily makes it one of the best wireless headset for gaming in the market.

But before you invest in the Sennheiser PXC 550, let’s dive deep into its design, performance, and features. 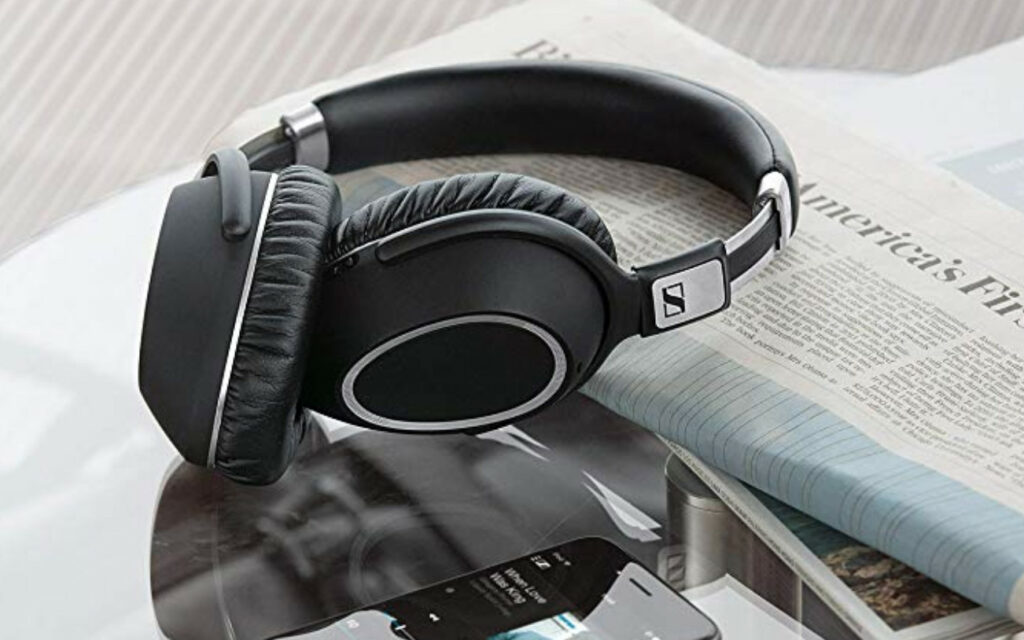 The feel to the Sennheiser PXC 550 is very luxurious, and you can tell it’s designed with high-quality material.

And weighing at 227 g, the headphones felt very lightweight and felt nothing was worn when first trying out the headphone.

Located on the top of the headphones are bands that are made of leather, which feels super comfortable and soft when first wearing.

The Sennheiser PXC 550 lets users tilt each ear cup when done using, which is convenient when storing the headphones.

So you’ll have the ability to turn on the headset by tilting the ear cup to its standard position, which powers on the device.

Or when the ear cups are tilted away and ready to be stored, then it’ll power down the headphones automatically, which is pretty unique in our books of awesomeness.

Also, the Sennheiser PXC 550 comes with Bluetooth as well and will provide a wireless connection to all mobile and other electronic devices.

And you’ll be able to find the Bluetooth button on the right side of the ear cup, just around the side edges.

Users will also have the option of a three and a half mm cable to connect to a mobile phone or an electronic device manually.

Additionally, on the right side of the ear cup, you’ll have the ability to swipe up and down, which controls the headphones volume from loud to quietness.

And you can swipe left and right, which controls the tracks for either audio or media that you may currently be listening to.

When tapping into the ear cup, this will let you pause or resume your current track and media as well. 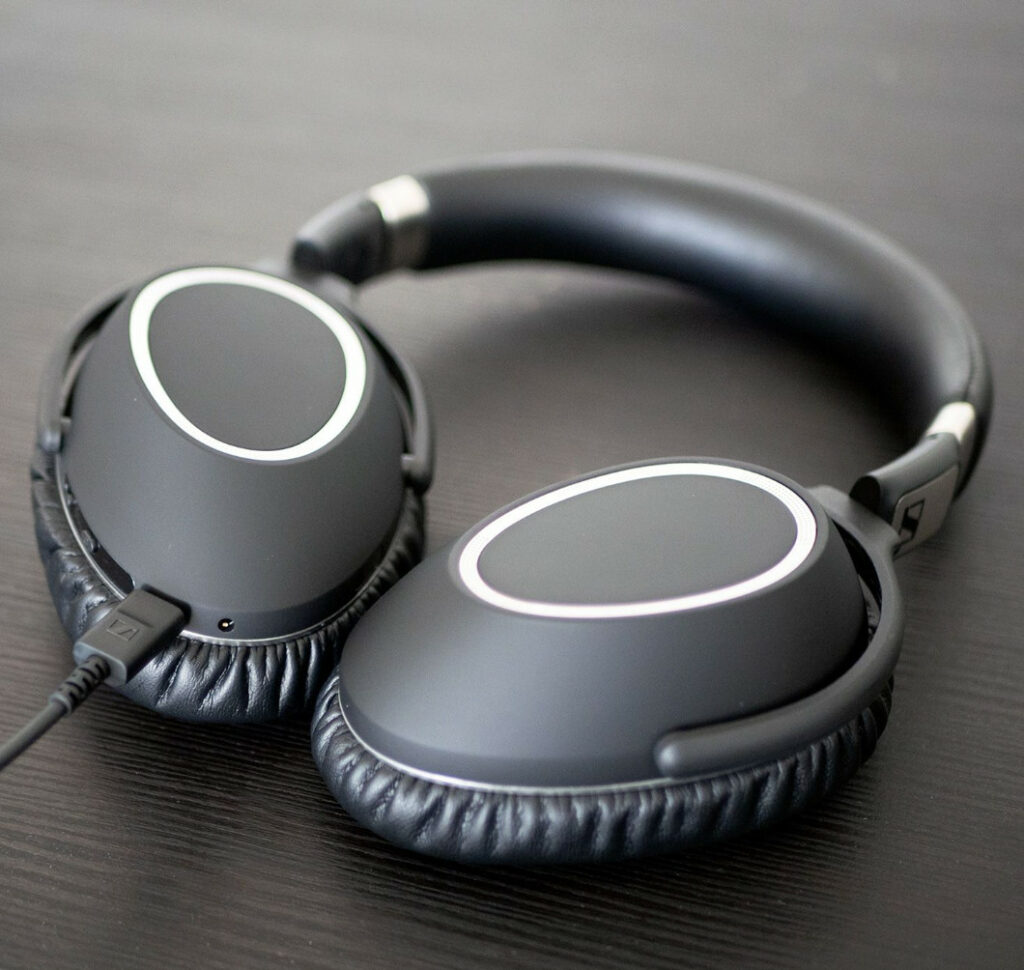 Located on the right ear cup, you’ll find the headphone’s control system, which is quite easy and very convenient to use whenever you’re on the go.

And you’ll be able to find the Bluetooth button on the right side of the ear cup, just around the side edges.

Users will also have the option of a three and a half mm cable to connect to a mobile phone or an electronic device manually.

Additionally, you’ll have the ability to swipe up and down, which controls the headphones volume from loud to quietness.

And you can swipe left and right, which controls the tracks for either audio or media that you may currently be listening to.

When tapping into the ear cup, this will let you pause or resume your current track and media as well.

Additionally, the Sennheiser PXC 550 also has a feature on the app called Smart Pause, which is super unique.

And when you do wear the headphones on again, your music or media continues to play.

But to use the Smart Pause feature, you’ll need to enable it.

Because it’s set to off by default when first opening the Sennheiser PXC 550 from out of the box.

What’s another cool feature about the Sennheiser PXC 550, is that you’ll have the ability to hear your immediate surroundings with precise clarity.

The way it works is when you decide to pause the music or track, automatically each ear cup will pick up the outside noises from your immediate surroundings and will be amplified as well.

Also, the Sennheiser PXC 550 has another feature called Noise Guard, which you can fully control through the app, by increasing or decreasing the percentage noise-canceling percentage.

However, you won’t be able to entirely block out 100% of your surrounding environments’ noise.

But when tested, the noise cancellation at 100% was very significant, and full immersion was obtained while listening to music and media. Making the Sennheiser PXC 550’s the best wireless headphones with noise cancelling features.

In terms of charging, the headset also has a USB port and does come with a USB cord as well.

And the USB port is located underneath the right ear cup as well, for easy access for charging.

Also, in terms of battery life, a full charge can last you up to thirty hours of headphone usage, which is fantastic for long trips and adventures. Making these headphones the best wireless headphones with longest battery life in the market.

When the battery went to zero percent, a full complete charge took around 3 hours.

You can always charge the Sennheiser PXC 550 into your laptop or desktop, as well as listen to music on the headphones while simultaneously recharging, which is pretty good if you’re ever on long trips.

However, when the active noise cancellation was on, the battery lasted about 20 hours, which was still great on the book for awesomeness.

In terms of buttons, the Sennheiser PXC 550 has the active noise cancellation feature button, which is located on the right ear cup.

And the second button located on the right side of the ear cup is the audio sound profiles, which lets you select a preset of specified characteristics for particular genres such as movies, music, and much more.

However, when testing out the buttons while wearing the Sennheiser PXC 550, it was a bit hard trying to press the buttons to change the sound settings due to its non-protruding profile.

Because the buttons are a bit hidden and are designed inwards into the headphones, but this shouldn’t cause any issues.

Granted, it would be awesome if the buttons protruded out for comfortable pressing conveniences.

Overall the Sennheiser PXC 550 is lightweight by design, and when first trying them out, there was no fatigue and felt very comfortable during prolong uses and long trips.

The air cabin pressure sensation was not felt when wearing the Sennheiser PXC 550 for prolonging uses as well, which is another plus.

The bass was very powerful, and this includes a more in-depth bass profile as well on the Sennheiser PXC 550, and you’ll be able to feel the bass when listening to music and media.

The Sennheiser PXC 550 is a state of the art headphone which provided a very much immersive experience to all music and media. And if you’re a gamer, making this the best audiophile headphones for gaming as well.

You can also check out other brand headphones such as the Sony WH 1000XM3 Headphones which provides similar quality build and performances. Or you can check out the Sony WF 1000x M3 headphones.

If you do have the budget, the Sennheiser PXC 550 the headphones to go if you do happen to like performance and sound quality, including aesthetics.