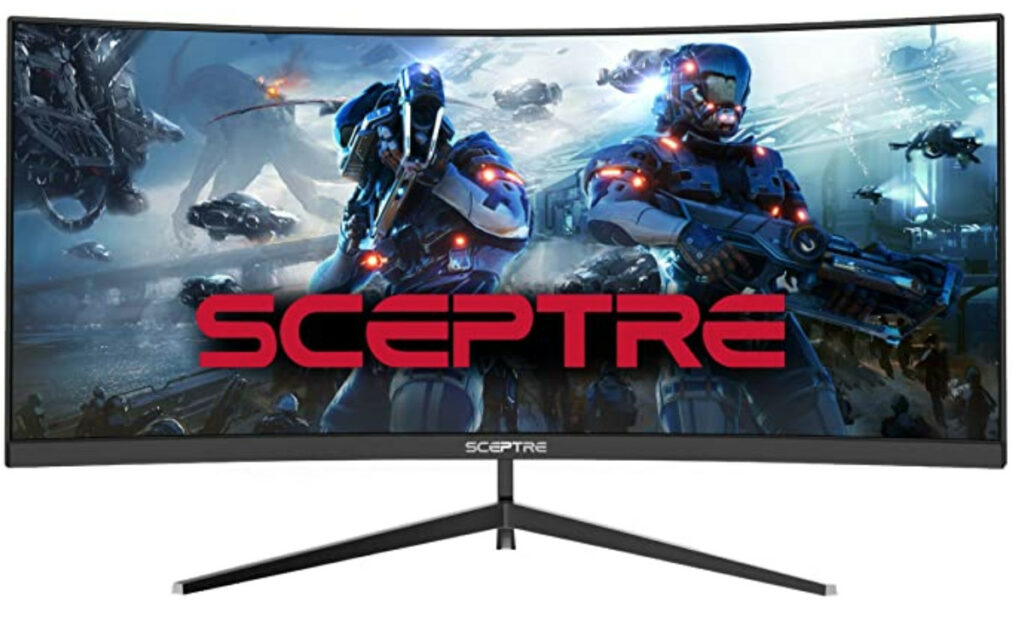 If you’re looking for a new gaming monitor that you can upgrade to this year, then you’ll need to consider the Sceptre C305B 200UN display.

The ultra-wide display will give you the immersive feel thanks to its curvature design; it adds a new level to your multimedia experiences.

And with its elegant looks, the C305B-200UN does pack the performance necessary for you to gain the advantage in your gaming sessions. Thanks to its quick refresh rate, you’ll be able to experience the graphical smoothness.

Before investing in this Sceptre monitor, let’s dive deep into its specifications, display design, performance, and features. 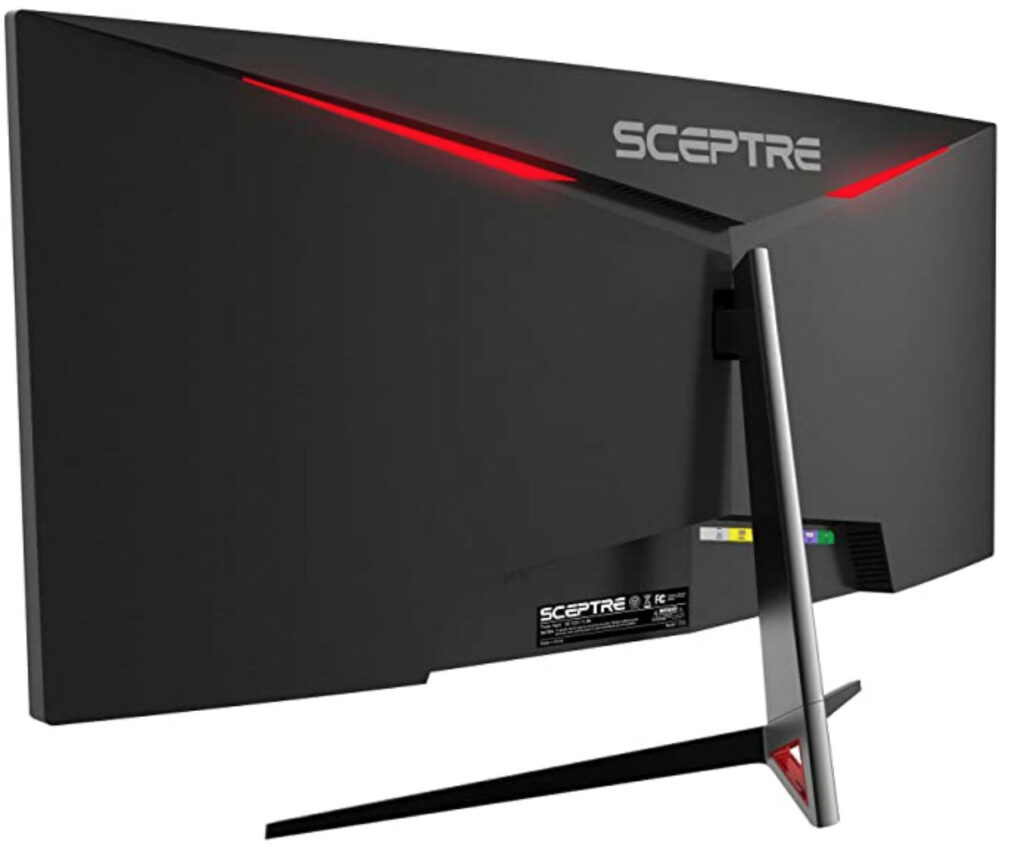 The impressive 30-inch behemoth of a display has a beautiful, elegant, and aesthetic look to the overall frame and design.

With a 1800R wide curvature, you’ll be able to have a sense of immersion and be absorbed in your gaming and multimedia sessions.

And you’ll be able to see the LED on the back of the display, which tapers into a V. The LED does add to the immersive experience and will make your current environment atmospheric.

In addition, the display has a stabled stand, thanks to its V-shaped base, the monitor won’t wobble nor move in case if you do slightly nudge the display.

Unfortunately, the stand isn’t ergonomically in design because it can only tilt, and this is normal for an ultra-widescreen monitor.

Besides, you’ll be able to replace the Sceptre monitor stand with a 75x75mm VESA mount, which will allow the display to have true movement and more room to maneuver.

You’ll be able to locate the connectivity in the middle rear of the display and consists of one DisplayPort 1.2, one HDMI 2.0, two HDMI 1.4, and one audio jack,

And with a few HDMI ports, you’ll be able to plug in any extra gaming consoles that you have. If you want to plug in more devices into the display, you can invest in an HDMI switch as well.

The display does have two 3-watt built-in speakers that sound decently great, but you’re almost better off with a pair of excellent headphones such as the Sennheiser PCX 550’s or the Sony WH 1000XM3 headphones or a set of dedicated speakers.

Also, you’ll be able to locate the OSD panel on the bottom right of the display, which consists of four functioning buttons and the power button. ANd you’ll be able to access its user-friendly OSD configurations menu.

Overall the entire Spectre monitor design looks sweet and aesthetically pleasing, which you can admire the display from afar. With a wide curvature design and the option of adding a VESA mount, the monitor is versatile. 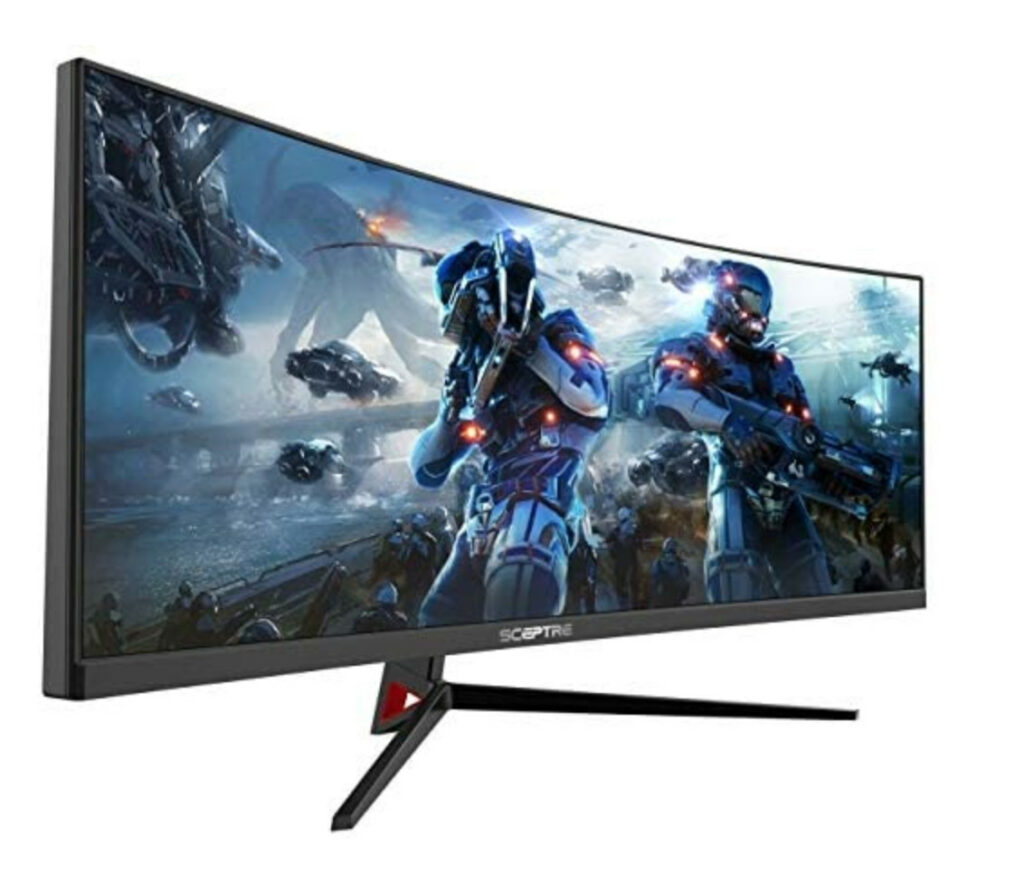 The Sceptre C305B 200UN measures at 30-inches, with a resolution of 2560×1080 UHD, running a 200Hz refresh rate and a 5ms response time, which is excellent for serious gaming and console gaming.

Thanks to its fast response time, you’ll be able to game with reduced ghosting and graphical trailing, and this is all due to its quick pixel response time.

With a screen aspect of 21:9, it’ll appear vast and wide, and with an excellent resolution, and you’ll have an impressive balance between pixel density and clarity.

If you’re coming from a 16:9 display, it’ll take a bit to adapt to the 21:9 screen ratio. When gaming, you’ll get that extra range of view as well, which is an immersive experience.

Also, the display has a contrast ratio of 3000:1 and a brightness level of 250 cd/m². And with a plethora of contrast and an excellent gamma spectrum, you’ll be able to notice the rich darks and brilliant lights within your multimedia.

In addition, the monitor has a 90% SRGB coverage as well, which will provide you excellent color in all your gaming and multimedia sessions.

The display has FeeSync and is also G-Sync certified and will work well with Nvidia graphic cards. The adaptive sync can run up from 48Hz to 200Hz refresh rates, and considering the Sceptre C305B 200UN is a VA panel, there’s no ghosting nor ghosting when FreeSync is on.

Plus, your games will run buttery-smooth without screen tearing nor graphical lag, which will take your gaming sessions to a new level.

Overall this Sceptre monitor doesn’t have any dead pixels and minimal backlight bleeding, which isn’t significantly noticeable. And with the gaming monitors quick refresh rate, there’s no ghosting and no trailing when viewing fast-paced action scenes.

Overall, the Sceptre C305B 200UN gaming monitor is a behemoth of a display, and with the added aesthetics and narrow bezels, you’ll be able to admire the Sceptre monitor from a distance.

The Sceptre C305B 200UN display works great for both PC and console gaming, and if you’re looking for an ultra-widescreen gaming display to upgrade to, then this monitor would be your ideal because it’s one of the best Sceptre monitors available.

But if you’re seeking out for more awesome gaming monitors that you can buy, then you may also want to check out some of the standard 144Hz gaming displays or some of the even faster 240Hz refresh rate monitors.