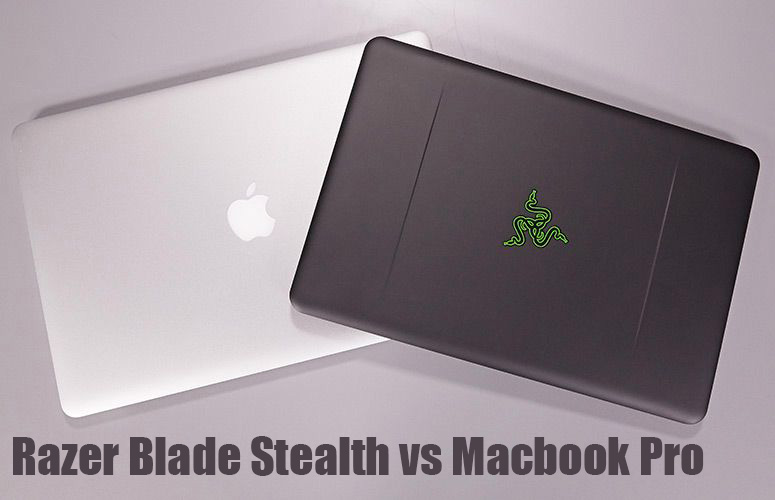 The Apple MacBook Pro’s are looking at some serious competition, introducing the Razer Blade Stealth. It’s new, sleek and has the components to blast through many games.

Razer is well known for their great hardware, PC accessories and their PC gaming systems. However, Razer has been developing an ultrabook called the Razer Blade Stealth.

If you’re looking for an in-depth look regarding the Razer Blade Stealth in comparison to the MacBook Pro, well you’re in the right place.

The Apple Macbooks are all state of the art devices and uses sophisticated technology to achieve the excellent quality and features it has now. And most Macbooks are high performing machines that will get the job done.

However, with the rise of a new competitor such as the Razer Blade Stealth, The Blade Stealth can stand against the Apple MacBook Pro.

The Razer Blade Stealth is a complex gaming machine that’ll give you the performance that you’ll need, whether if you’re gaming or if you’re working on an intensive program that may be graphically intensive.

With the Blade Stealth’s 13 inch screen, it’ll offer you great aesthetics and features that you can utilize. The Razer Blade stealth will provide you with 4K features as well if you’re looking to max out your multimedia experiences to the fullest.

With its slim built and compact packaging, and with a black aluminum finish to it, you’ll have one of an aesthetic machine on your side.

So we’ll take a look at the comparisons between the Razer Blade Stealth and the MacBook Pro.

The Razer Blade Stealth uses excellent quality hardware and performs pretty high with graphics and speed. Equipped is the Intel Core i7-8550U processor, with 16GB of RAM and an M.2 SSD which are all excellent because all of these will cost you around $1,400, which is an excellent deal for a gaming laptop.

However, the Razer has an excellent dedicated GPU chip (GeForce MX150), which is superb for gaming. It won’t blaze through the graphically intensive games such as Battlefield 5.

Plus you’ll also have the option of an external graphics card if you plan on upgrading in the future. 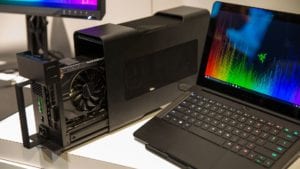 Compared to the cheaper versions of the MacBook Pros, you’ll get an older version of the hardware. However, you’ll still get outstanding performance.

Equipped in the MacBook Pro is the Core i5 processor, with 8 GB of RAM and 128GB of SSD, which all are excellent, which will all cost you around $1,300.

If you’re willing to invest an extra thousand dollars on the latest MacBook Pro, you’ll be able to get one with the Core i7 processor, with 16GB of RAM and one terabyte of SSD storage, which I am using right now. Which is incredible has been impressive for me for a few years now.

However, if you’re looking for pure gaming, then you’ll have to get the Blade Stealth, which is geared towards gaming.

The winner for performance will go to the Razer Blade Stealth.

You’ll be able to use Razer Blade Stealth’s touch screen. However, it’s pretty sensitive and tracks motion superbly. But the MacBook Pro’s don’t have the touch screen feature.

The Blade Stealth is lightweight and is superbly portable. Thanks to its sleek, thin and lightweight design, you’ll be able to carry this laptop anywhere with ease.

The bezel has also been significantly reduced, and the screen is a bit wider (16.4mm wider) than the previous version of the Blade Stealths.

Both the Stealth and Macbooks are aesthetically pleasing. The Stealth has a sporty looking to it. With its black aluminum finish to it, you’ll get a beautiful exterior.

Also, the new MacBook Pros have the new Touch Bar features into them. The touch bars are great if you’re a heavy video and audio editor because it makes it convenient for you to slide through the slides and video clips. 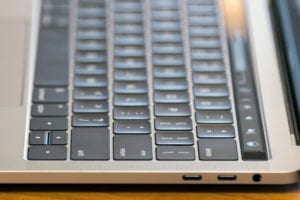 Other than that, the Touch Bar doesn’t do as much different than those features mentioned above.

The screen bezel for the MacBook Pro’s are somewhat the same as the previous MacBooks, and I think if Apple can reduce the bezels, the

While the keyboards for the MacBook Pro are pretty comfortable to type with, the Blade Stealth may have the upper hand when it comes to comfortability. And both devices have superb trackpads.

If you do use the RGB lighting for the keyboard a lot, then expect a reduced in battery life.

The MacBook Pro design is much sleeker compared to the Blade Stealth.

With the Blade Stealth, you’ll have a single Thunderbolt 3 port, with a pair of USB-A 3.0 ports and an HDMI output.

The MacBook Pro has four USB C and Thunderbolt 3 ports.

If you’re creative and want to get business done and don’t game at all, then the MacBook Pro will be best suited for you.

The Blade Stealth and MacBook Pros have their advantages and disadvantages, and hopefully, this guide has helped you make an educated choice on which machine you’re planning on upgrading to.