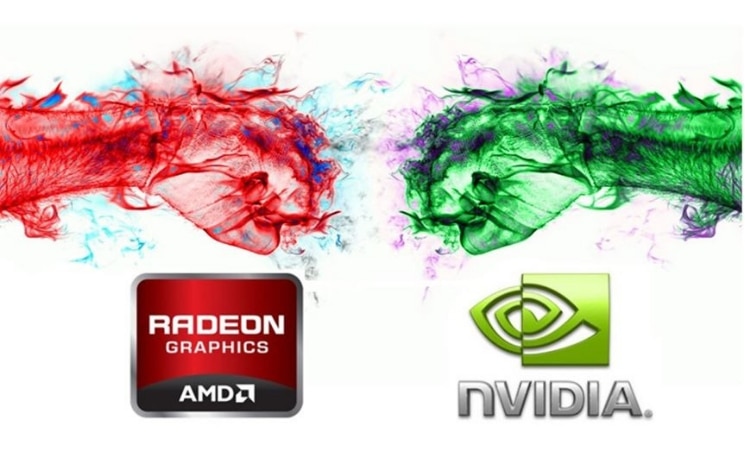 The two behemoth companies such as Nvidia vs AMD graphics cards are a force in the computer and gaming community. Both AMD and Nvidia, having great reputations, you may be in a quandary on which GPU to get for your next upgrade.

If you’re out in the market looking for the right graphics card for your gaming rig, then you’re in the right place.

When gaming at high resolutions and with all settings maxed out, then you’ll need a top performing graphics card to play your current games.

And that is why this guide has been developed.

From the Nvidia GTX to the RTX series, the RTZ series is relatively new and are considered the expensive ones out of all the past series.

And AMD now has the Radeon VII which is a direct competition to Nvidia’s RTX 2080. Also, AMD has been producing more Polaris cards as well.

So who produces the best GPU’s out of the two behemoths? In the following list, you’ll see the different features and different designs that integrated within the GPU’s.

If you’re considering a high-performance graphics card, then you’ll need the budget for it.

In the graphics card community, people are stating that AMD is known for its affordable prices and Nvidia for the more expensive, top performing cards. However is this accurate?

And the answer to that is, yes it’s a bit accurate. The Geforce RTX 2080 Ti is around 1,199 USD, and that’s twice the price from the last generation GTX’s.

However, an affordable RTX card would be the GeForce RTX 2060, which is around 349 USD.

With AMD, you’ll be able to get a Radeon VII for around 699 USD. The performance compared from the Radeon VII to the RTX 2080 is almost the same in comparison.

The performance for both the Nvidia and AMD GPU’s are almost the same. However, in my opinion, Nvidia has a slight edge over AMD.

The new RTX series such as the RTX 2080 dominates all the other graphics card out there that are currently in the market. The RTX 2080 is packed with 11GB worth of GDDR6 memory.

The RTX 2080 also has the RT and high-end Tensor cores, which will give you real-time tracing as well.

However, can AMD compete with this?

AMD does have a card out there, which is the Radeon VII. And can compete up against the RTX 2080. The AMD GPU’s are currently dominating the mid-range priced GPU’s that are out there in the market.

However, if you’re playing on the latest current games with the 4K feature, then Nvidia would be your best choice.

If you’re looking for the RTX series such as the 2080 RTX 2080 Ti, you’ll likely have excellent performance. With its current price of around 1,000 USD, you’ll have the best performance and top features.

AMD on the other side has the Radeon RX Vega 64, which is another powerful card, running around 400 to 500 USD.

Now let’s make a gameplay comparison on the video cards between AMD and Nvidia.

Games such as Battlefield 1, performed very well with the GeForce GTX 1080 Ti, running around 154 FPS on average.

The Vega 56 card runs around 127 FPS. However, if you increase the resolution to 1440p, the two Nvidia cards came out to be the winner in comparison to the AMD card.

The GTX 1080 was the clear winner here, running with 1080p resolution, with all settings on Ultra. And averaged about 102 FPS.

The Radeon RX Vega 64 card, ran at 78 FPS, which was tied with the GTX card, with settings running in normal.

However, when the settings were set to ultra, the Vega 64 card didn’t do so well against the GTX cards.

During the side by side comparison, the RTX turns out to be the clear winner. However, the prices for the RTX are high.

The AMD cards are much more affordable and can run you great at decent settings. If you’re running at 1440p settings and are using 4K, then the AMD Vega cards will be great for you.

Having the right software is crucial and can make your world the big difference in terms of performance and gameplay graphics.

Both AMD and Nvidia do have stable and great software and drivers. However when it comes to the slight edge, Nvidia has the better software, and this is basing off of Nvidia’s track record of consistent great software.

When running a side to side comparison of how both software works, Nvidia’s control panels look a bit outdated.

So when it comes to the drivers and software of the two behemoths, they are both tied. Both AMD and Nvidia produce stable and reliable software.

Both Nvidia and AMD have great features and performances. With Nvidia having a slight edge, the AMD is excellent as well if you’re on a budget.

The Nvidia vs AMD graphics cards is an on going battle. And both AMD and Nvidia have superb qualities that can fullfill your gaming needs.

So which of the two of the behemoths are better? Well, neither are better. They both have excellent quality features and performances.

However, if you’re on a tight budget and want to jump right into the games without overclocking or the extra features, then I’d go with the AMD cards.

However, if your a graphics enthusiast, and are aiming for 4K gaming, and you rely on heavy graphics to get the work done, then you’ll have to go with Nvidia.

So there you have it, none is better than the other. And it depends entirely on what needs you’re trying to fulfill.