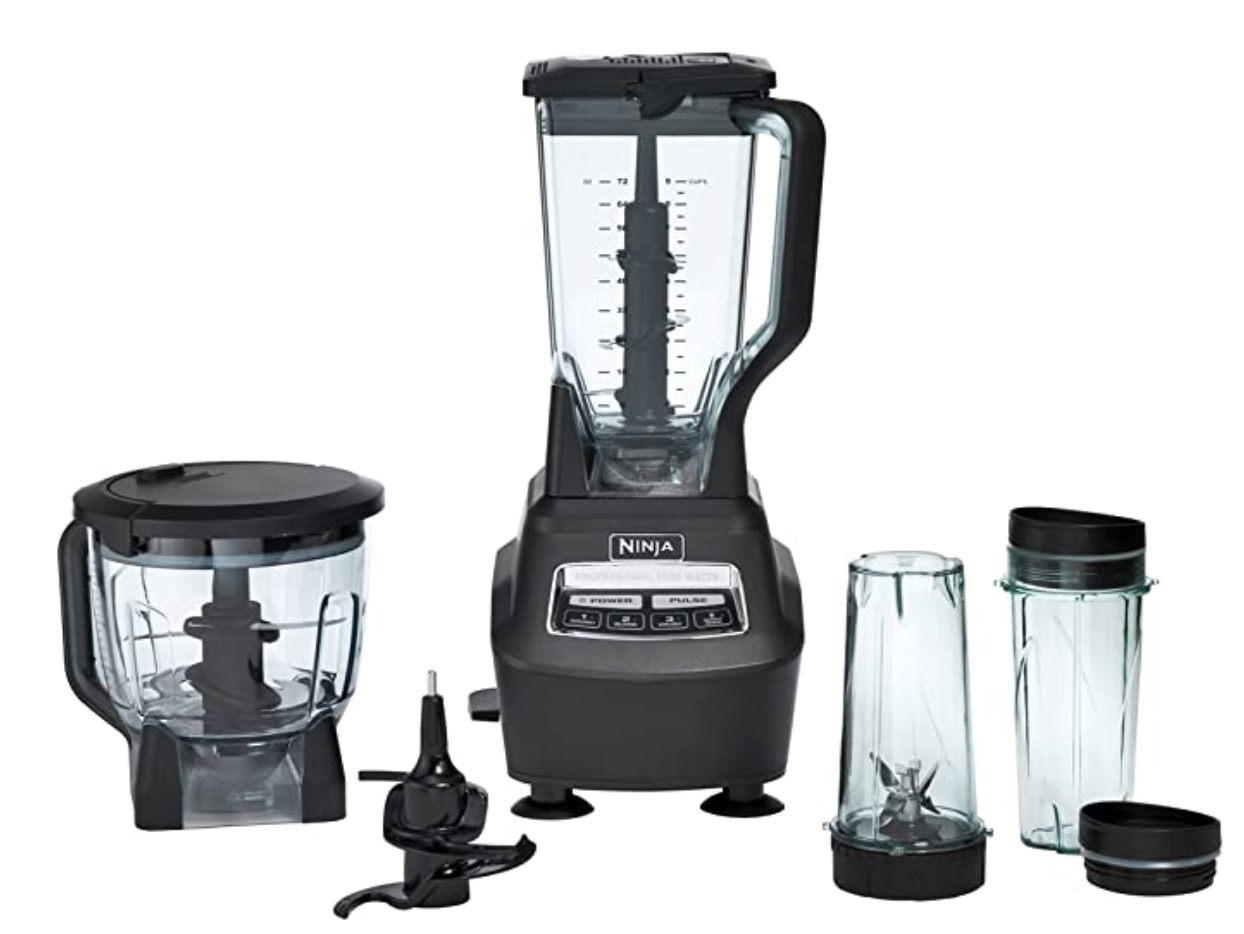 The Ninja BL770 is another state-of-the-art blender that Ninja has made. Overall it’s a well-rounded blender great for making smoothies and delicious drinks.

The blades are outstanding, and the edges are sharp as well, making it great for blending roof fruits and vegetables as well as blending ice.

With the blender’s aesthetic design, it’s a well-built and well-rounded blender in general. So before investing in the Ninja BL770, let’s dive into its design, performance, and features.

Overall the blender comes with a 72-ounce blender pitch, with various accessories such as two 16-ounce jars, a 64-ounce bowl to process food, including the lid, a user manual, and the blades themselves.

Also, the power cord measures at feet, which is more than enough to reach your outlet if you plan on using the blender from a distance.

The Ninja BL770’s main container measures at 72-ounces, which is approximately 2130ml, and the container itself weighs around 2.5-lbs. Also, the containers are BPA-free.

In addition, the container holds up a lot of liquid and is excellent for serving large gatherings, large families, or if you have lots of friends over.

The blender unit itself weighs around 9-lbs, with a height of 17-inches, and will take a little bit of space around your kitchen because the blender is bit large and bulky.

Also, the lid is very easy to attach, and it locks on with ease. You’ll have to align the arrows to the container, and it will lock itself into place.

The great thing about the lid is there’s another mini lid that you can open in case if you want to add any other foods, fruits, or veggies into the container while blending, making it super convenient for you to add food while simultaneously mixing.

The great thing about the blender is its six sharp blade counts, which are stainless steel and can easily be removed if you plan to wash the container itself, which is very convenient.

The other two smaller 16-oz containers also come with mini blades as well specifically designed for them.

Overall, the blades’ design is outstanding and will blend your foods, fruits, and veggies all together with ease.

The Ninja BL770 overall it’s great if you’re making smoothies and drinks; usually, it’ll take you at least less than one minute to create a high-quality smoothie then you can serve deliciously.

The blender itself is excellent for crushing ice and usually takes less than a second to have well-blended, quality ice, which then you can serve chilled smoothies and chilled drinks in less time.

The Ninja BL770 blender has too many features and doesn’t have the hot soup mixing feature, which may be unfortunate.

Also, it doesn’t have any special coffee mixing features into the blender’s features.

But it does have a special crush ice feature, which is specifically designed to blend ice with ease.

In addition, the blender has a doll and blend mode, which will adjust the blender speeds.

Does the Blender Self-Clean?

Unfortunately, the Ninja BL770 blender doesn’t have any soft cleaning features; however, its other predecessors do have self-cleaning modes that you can use.

However, manually cleaning the container itself is easy, remove the blades for safety, and you can easily clean the containers, or you can just put them into your dishwasher.

The blender itself is designed and geared towards professionals and restaurant owners; thanks to its high-speed motor, you can serve as many drinks and smoothies as you like.

Additionally, the Ninja BL770 it’s a well-rounded blender making it outstanding for making smoothies and crushing ice; however, it doesn’t have any additional features, such as mixing hot soup or making coffees.