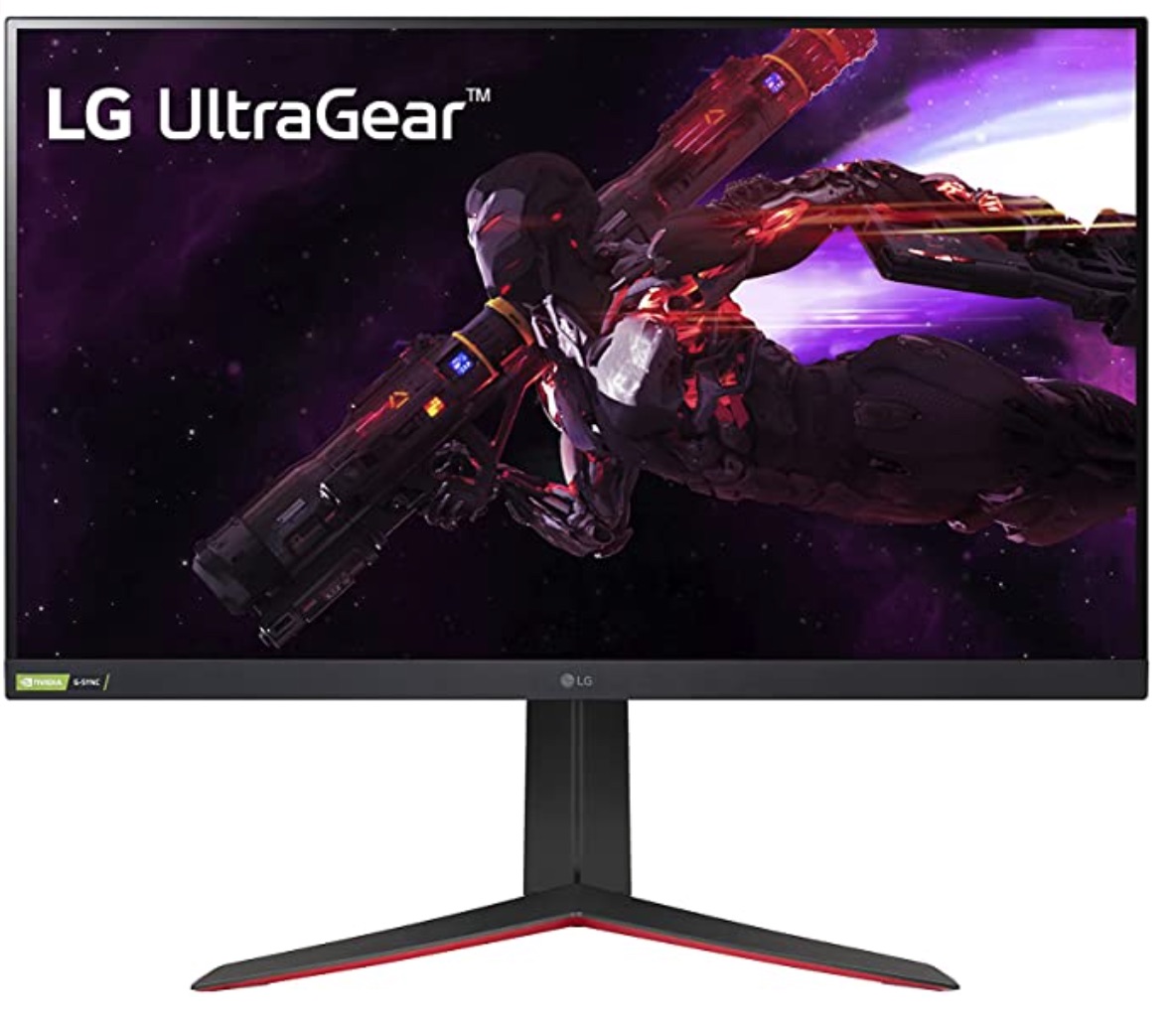 The LG 32GP850-B is another behemoth of a gaming monitor that LG has produced. Having a quick 165Hz refresh rate, it’ll give you the slight edge when it boils down to your gaming sessions.

And with the 32GP850-B’s adaptive sync capabilities, the monitor enhances gaming and multimedia experiences to the max.

Being a 32-inch display, the screen gives you an excellent immersion experience, and there’s more than enough room thanks to its screen real estate.

Overall, the LG 32GP850-B is a well-rounded gaming monitor that can be used for daily tasks and creative uses.

Before buying the LG 32GP850-B monitor, let’s look at its specifications, design, performance, and features. 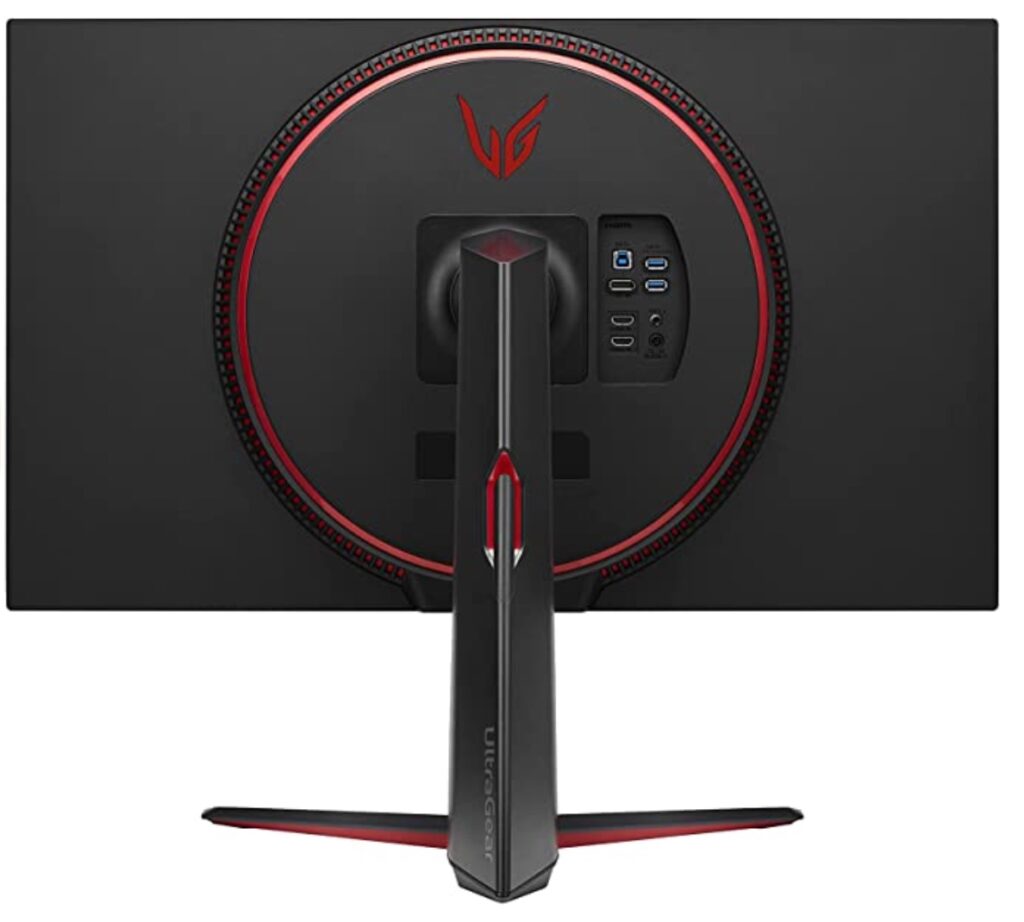 The LG 32GP850-B measures at 32-inches, with a nice aesthetically pleasing look. Thanks to its nice matte-black texture, you’ll be able to admire the display from afar. You can find the LG’s logo on the rear as well, with a nice solid red color, along with its red circular ring adding to the aesthetics department.

Additionally, the monitor has thin bezels on all of its three sides. Making it great for immersion and encouraging you to buy a second 32GP850-B to have a dual-screen set-up.

The screen is made up of a matte texture, allowing it to handle reflection and glares easily.

The display has an excellent v-shaped base, it is very stable, and the 32GP850-B sits on a great foundation. The stand is ergonomically well designed. The stand won’t take too much space, so you won’t need to clear any desk space.

You can easily find the connectivity on the rear center of the display, consisting of one DisplayPort 1.4, two HDMI 2.0, three USB 3.0, and one audio jack.

Thanks to its HDMI 2.0 ports, you’ll be able to plug in any gaming consoles you may have, such as the PS5 or the Xbox One easily, and have a blast within your console gaming sessions.

The monitor also has an abundance of USB ports; you’ll also be able to use the display as a charging station.

You’ll find the OSD panel on the bottom center of the LG 32GP850-B. It has a traditional set-up compared to the other LG monitor series; the panel consists of one joystick to control the OSD configurations, and it’s convenient.

Overall the LG 32GP850-B is a behemoth of a monitor; however, it’s not curved, but that shouldn’t be an issue. The build quality feels like a work of art, and the display is well ergonomically designed. 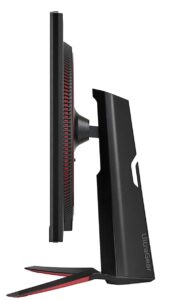 The LG 32GP850-B is an IPS panel with a resolution of 2560×1440 and a 165Hz refresh rate that can be overclockable to 180Hz and a fast 1ms response time. And Overclocking to 180hz can only be achieved via DisplayPort. The input lag performs superbly with 5ms of input lag, providing you with a quick and responsive gaming session.

The contrast ratio sits at 1000:1, along with a 350 cd/m² brightness level. The peak brightness is superb and is high enough compared to its other older models.

Additionally, the contrast ratio performs okay; the darks appear to be grayed whenever you’re viewing the screen in dark environments.

Color accuracy is superb straight out of the box; thanks to its 100% sRGB and 90% Adobe RGB coverage, the 32GP850-B is awesome for professionals and creatives alike, making the monitor great for photographers color coders, and creative projects.

In addition, the monitor has an excellent HDR color gamut; the monitor provides you with a wide range of DCI P3 colors as well.

You’ll be able to choose Overdrive options as well, such as Off, Normal, Fast, and Faster. However, it’s always recommended to keep it on Off mode because other than that; you’ll start noticing a bit of overshoot and graphical artifacts.

The LG 32GP850-B does have FreeSync and is G-Sync certified, which is awesome if you have an Nvidia graphics card. The VRR ranges from 180Hz to 20Hz as well. G-Sync only works via DisplayPort.

Overall the LG 32GP850-B is a superb gaming monitor; being an IPS, the contrasts aren’t as great as the other variants, so deep blacks will be gray.

But the color accuracy is superb enough for both professionals and creatives alike. Gamers can significantly benefit from this as well.

The 32GP850-B has a fast refresh rate which you’ll be able to overclock to 180Hz if needed, and a quick 1ms response time which is ideal for competitive gameplay. 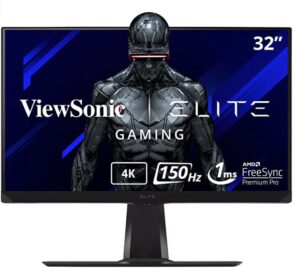