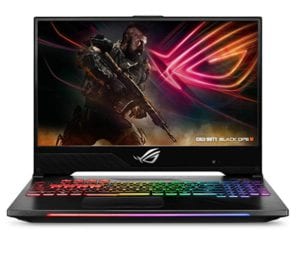 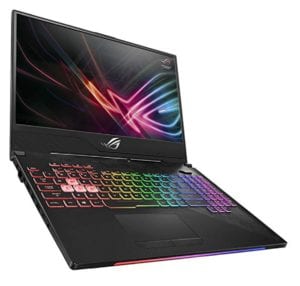 You’re on the market for a new gaming laptop or are in the process of upgrading to a new one. And you may be eyeing the Strix laptops.

With the GeForce GTX graphics cards installed in them, you’ll have amazing graphics while running in 144 Hz.

Let’s review and look at the differences between the two models, the Hero and Scar,

The great thing about the  Strix models is that they’re a combination of desktop and laptop power. However with its 1800 to 2000 USD price range, are the models worth your investments?

If you’ve been excited to get your hands on one of these, and they’re here for you ready for use.

What Are The Differences Between The Two Models

So what is the difference between the two models?

Both models have their features.

The Display and Graphics

Both the Hero and Scar models are a mixture of the power of a gaming desktop with a powerful slim lightweight laptop. And gaming with a 144 Hz of refresh rate, you won’t go wrong.

Both running with a 144 Hz display that means you’ll be able to game at 144 FPS, which is fantastic. Plus the added 3ms response time, which is great if you’re a competitive player.

The 3ms response time is also helpful because you won’t see ghosting and this will be helpful if you’re playing any fast-paced action games or E-sports.

Both are equipped with the GeForce GTX 2060 graphics card, or for more power, you’ll have the option to choose a GeForce GTX 2070 as well, which is pretty awesome.

Both the Hero and the Scar are equipped with the Intel Core i7-8750H processor, with a memory of 32 GB of RAM.

Not only that, you’ll have state of the art drives with the option for a more fast SSHD if you want to increase your loading time.

The impressive architecture of the device allows the heat to flow through the device much better.

So if your a long term user or gamer and you operate for hours, this feature will serve you and will prevent any heat built up within your machine.

The design of the Scar model is pretty impressive and aesthetically pleasing. The grey military camouflage design is incredible with the body being aluminum finished to it. 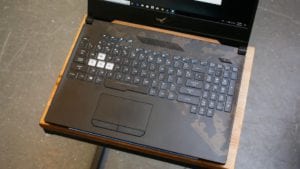 Thanks to its RGB LEDs, you’ll game with impressive lighting, and it’ll be useful if you’re gaming in a dark room or a dim environment.

The Scar’s a slim built and weighs only 2.4 kg and is easily portable if you’re always on the road.

With its sturdy cover, bezel, and design you won’t have to worry about the laptop getting scratched or damaged. However, you can always use extra cover if you need more protection if that’s your concern.

While the design for the Hero is designed for MOB players. With its impressive colors and design, it’s pretty legit.

The design itself has a punkish look theme to it, with its sharp looks, you’ll have a great time playing your real-time strategy games with its excellent RGB lighting in its keyboard.

The AWSD keys stand out due to its transparent key and lighting. The Scar’s keyboard is specially made for FPS gamers and should be helpful when you’re gaming in dark environments.

Even though it’s a mechanical keyboard, however, it doesn’t have the travel or weight of one.

The trackpad will serve you well, however investing in an excellent mouse is essential if you’re gaming.

With the Hero’s keyboard and design being made specially made for MOB players, you’ll have the QWER keys highlighted thanks to its transparent keys and lighting.

Great if your gaming in dark environments as well.

Thanks to its modified F1 through F4 keys, you’ll be able to program these keys to check your CPU status and other settings within your computer.

You can control the fans speed has as well, thanks to its Fan Overboost feature. You‘ll be able to toggle this within the keyboard manually.

The typing is fantastic and should be easy. Thanks to its spacious room, you won’t accidentally fat finger any keyboards.

Which One Should You Choose?

If you want a well rounded and portable machine, then the Scar is it. However, a bit expensive than the other laptops, the Scar will deliver.

Thanks to its main features, which is the Core i7 and the GTX GPU, you’ll be able to game in quality performance.

The Hero is a great model; if you’re a MOB player, you’ll have the ease of executing certain features.

It may struggle on some triple AAA games such as the current Ghost Recon or current Tomb Raider. But the Hero still delivers and should serve you well.