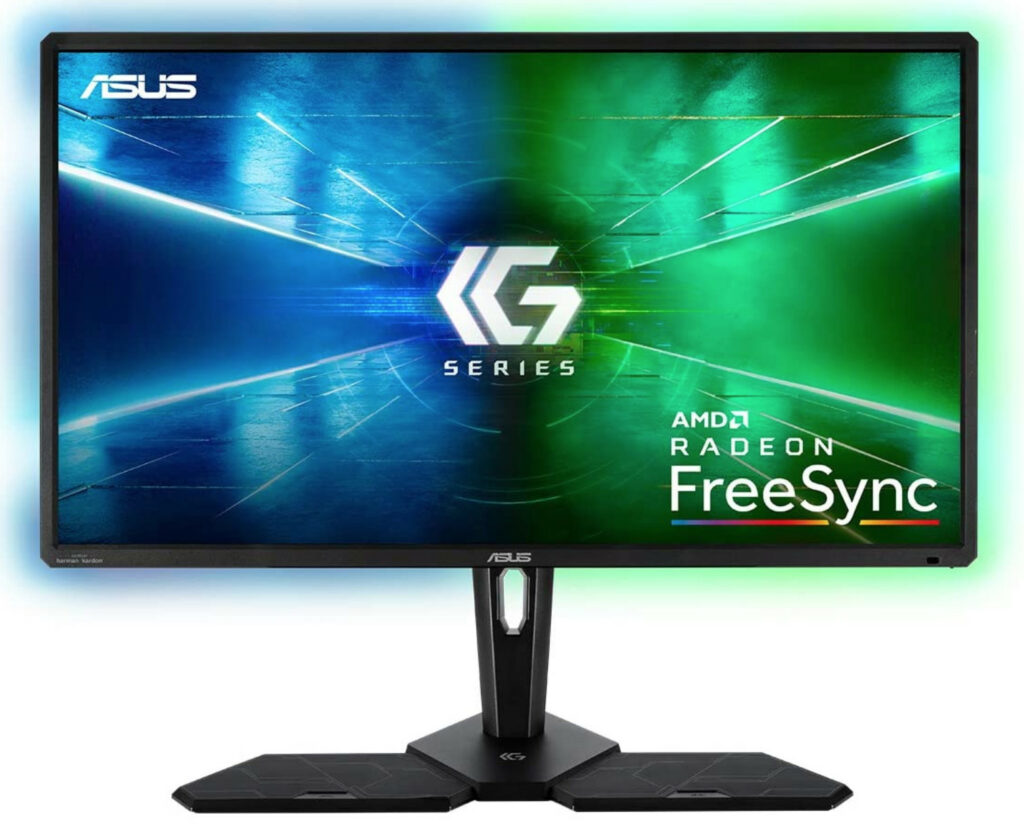 If you’re thinking about upgrading to a new gaming monitor this new year, then the Asus CG32UQ monitor is the one you’ll need to buy.

The Asus CG32UQ display is geared towards serious console gamers that need that extra performance, quality, and speed. And with its added features and performance, you’ll be able to gain the upper advantage.

Besides, this display is packed with sixty-six RGB lighting on its display and will give you a more atmospheric and immersive gaming environment.

So before purchasing the Asus CG32UQ gaming monitor, let’s dive into its specifications, design, performance, and its features. 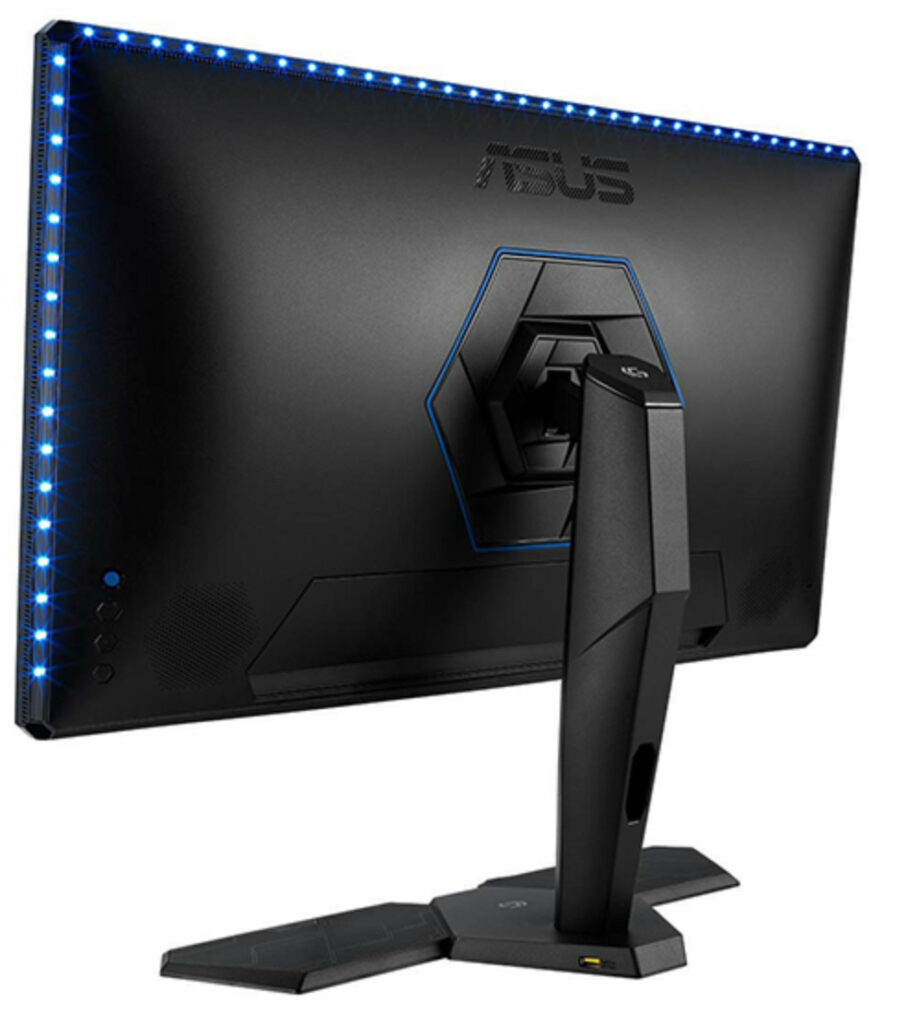 The Asus CG32UQ is an aesthetically well-built display, along with its sixty-six added new RGB lighting around the display, making gaming and watching movies atmospheric and immersive.

The display measures at 32-inches and will give you more than enough screen real estate space to have multiple projects and windows open simultaneously.

Additionally, the display isn’t bezel-free but does have a narrow bezel design, so immersion experience shouldn’t be an issue.

Also, the display itself weighs around 29.5-lbs and is a bit heavy, but this shouldn’t be a significant problem if you’re planning on setting this monitor up in one permanent location.

The stand is fairly ergonomically built and serves a stable foundation, thanks to its centered diamond shape base along with its two polygonal feet, which also acts as a charging station for all of your gaming devices.

You’ll be able to adjust the display in height and be able to tilt the monitor. However, the stand won’t let you swivel, nor pivot.

But you’ll be able to opt-in for a 100x100mm VESA mount if you need true flexibility and full-screen maneuverability.

In addition, you’ll be able to find the connectivities in the rear of the monitor and consists of one DisplayPort 1.2, three HDMI 2.0, four USB 3.0, and one 3.5mm audio jack.

And thanks to its plethora of USB and HDMI connections, you’ll be able to plug in multiple electronic devices, mobiles, and extra gaming consoles into the Asus CG32UQ gaming monitor and use it as a charging station as well.

Additionally, the display comes with two 12-watt speakers, which sound pretty decent. Still, you’ll always be better off with a set of dedicated speakers or a pair of excellent headphones such as the Bose 700 or the Sony WH 1000XM3 headphones.

You’ll be able to locate the OSD panel on the rear right side of the display and consists of three buttons along with a joystick. And the joystick is very convenient and will give you the convenience of navigating through the OSD menu with ease.

And the Asus CG32UQ also includes a handy remote controller that’ll let you control and reconfigure your OSD settings from a distance, in case if you’re console gaming a few feet away from your gaming display.

Also, navigating through the OSD settings, feels intuitive and has a user-friendly style when adjusting your monitors’ configurations. The Asus CG32UQ also provides you with four presets of gaming profiles from FPS, racing, combat, and movie mode.

Overall the Asus CG32UQ display is aesthetically pleasing alongside the added RGB lighting to go along with it. You’ll be able to indeed have an immersive and impressive experience.

However, the only downfall is that the Asus CG32UQ weighs around 29.5-lbs and can be a bit heavy when you’re planning on moving and relocating the display around. 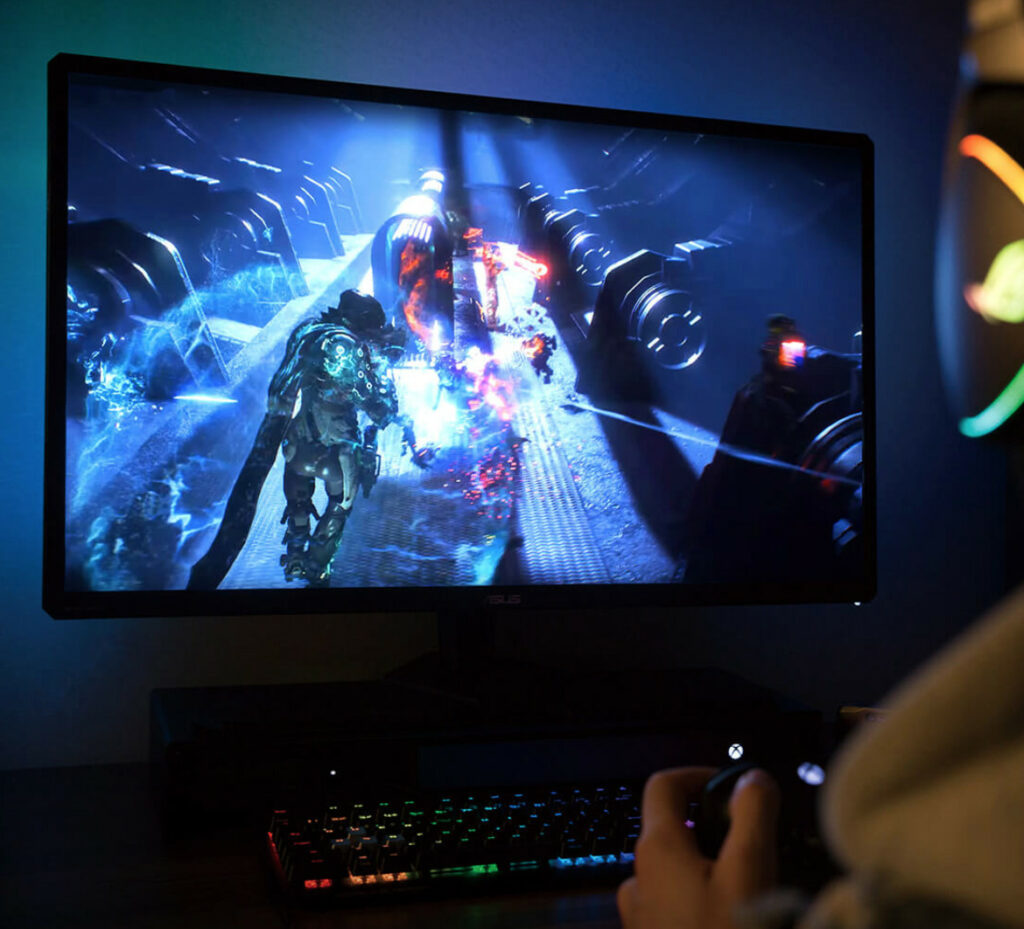 The Asus CG32UQ is pretty big, with a 32-inch screen running with a resolution of 3840 x 2160 and can run in 4K as well. The VA display has a refresh rate of 60Hz with a 5ms response time, and this is great enough for serious console gamers that are willing to gain the advantage.

In addition, the display has a contrast ratio of 3000:1 and a brightness level of 400 cd/m², which will give you a plethora of contrast and a wide spectrum of gamma.

There’s a bit of back-light bleeding in extremely dark places. However, it’s not significant to notice and shouldn’t be an issue.

Also, the Asus CG32UQ display has a 120% SRGB coverage and a DCI-P3 95% making the display vivid with crisp images and colors.

Along with the HDR feature, you’ll be able to turn on, which will give you a more superb and defined colors during your gaming sessions. And the HDR didn’t provide any saturations in terms of color and performed as it should.

During fast-paced scenes, the pixel response was not on par and ghosting, and few graphical blurs occur as well.

Additionally, the display is FreeSync ready and is also G-Sync certified, and will work great for Nvidia graphic card users. And the adaptive sync can run a range of 40-60Hz.

Once FreeSync is active, you’ll be able to take your gaming experience and enjoy the super smooth buttery-like gameplay without any image lag nor screen tearing in the process.

And the great news is that you’ll be able to use adaptive sync for all DisplayPort 1.4 port and the HDMI ports included.