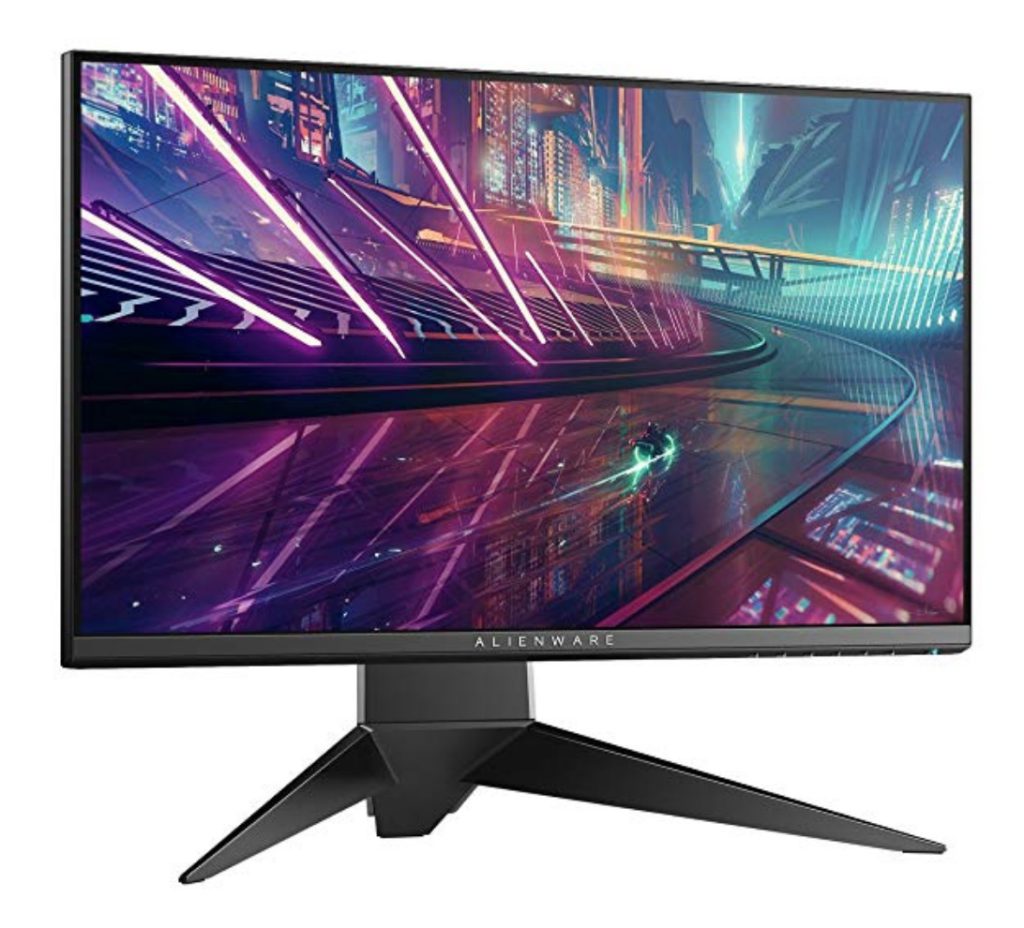 If you’re looking to upgrade your current monitor, then you may want to check out the Alienware 25 Gaming Monitor AW2518HF Review.

The Alienware AW2518HF is a 240Hz gaming monitor and is best suited for fast performing games and anything fast-paced.

If you’re either an Nvidia or AMD graphics card user, it’s a win-win for everybody. You have the option to choose from a FreeSync or a G-SYNC monitor model.

If your intentions are not to use the variable refresh rate technology, and if you’re an AMD graphics card user, then this monitor will be for you as well.

With its excellent performance and aesthetic design, you’ll have a great time gaming your way, or if you want to “Netflix and chill”, this monitor’s also great for that.

The Alienware AW2518HF monitor offers an excellent range of features. You’ll have a TN panel and other variety of functions.

You can pair this with either an Nvidia or AMD graphics card and have a lag free and choppy free gameplay experience. You’ll have no screen tearing or jagged artifacts from this monitor once paired with either graphics card.

Maybe you want to tilt the screen or move it in a different point of view. If you’re looking at the monitor from different angles, then you may see different tones of colors.

With a lightning-fast refresh rate of 240Hz with 1ms response time, this will be perfect if you’re competing or if you’re playing a fast-paced action game.

The refresh rate and response time combined will give you super smooth gameplay, without any lag from the screen.

The images and colors from the Alienware AW2518HF monitor are vibrant, considering this is a TN panel type. However, you’ll be able to achieve more vibrancy and clarity with a VA or IPS panel.

If you’re a competitive player and a professional gamer, then this 240Hz monitor would be ideal for you. And this is because you’ll need that extra millisecond that you can muster out of your gaming monitor.

With a bit of sacrifice of image quality, however, you’ll get the fastest response time from a TN panel. And with a 1080p resolution, you’ll easily be able to reach higher frame rates. With a 1ms response time, the Alienware AW2518HF is an outstanding monitor.

You’ll also have OSD (On-Screen Display) which helps calibrates your monitor for certain types of games such as if you’re playing a first-person shooter, sports or a real-time strategy game, the OSD feature optimizes your screen for that type of genre.

In the bottom of the monitor, you’ll be able to use the OSD buttons; there should be six of them. And you’ll also be able to manually re-program four of these buttons and assign them shortcuts.

You can also use some of the other features such as Game Enhance Mode or Dark Stabilizer.

Each one operates different, the first one optimizes whenever you decide to play a game, showing you the FPS, and an on-screen timer while gaming.

The Dark Stabilizer will make it clear for you to see in the dark.

You’ll also have a gaming-centric menu which lets you have all the preset gaming modes and have access to the dashboard. And you’ll have that gaming feel to it as well.

You’ll be able to have a lot of options to connect You’ll get two HDMI 2.0 ports, with a DisplayPort 1.2, one headphone jack, and four USB 3.0 ports

If you have an HDMI switch, you’ll also be able to use other devices on this monitor as well.

You have the options to choose from between the ADM’s FreeDync or Nvidia’s G-SYNC monitor. So you’ll need to match your monitor to your current graphics card.

Once paired up with either an AMD or an Nvidia, you’ll unlock the FreeSync and G-SYNC features, which allows for smoother gameplay without tearing and no lag nor stuttering.

However, if you do have an Nvidia graphics card the G-SYNC feature is a bit more expensive than the FreeSync, due to Nvidia’s specialized hardware.

With its aesthetic design, you’ll be able to do a ton with its features as well.

You can tilt, swivel 20 degrees, stand or pivot 90 degrees according to your preference. And this is all thanks to its ergonomic design, which lets you adjust the monitor in many ways.

The monitor has a high silver and black finish to it with the Alienware logo on the back of the monitor which gives you the Alienware series feel to it. The screen is thin and pretty lightweight which is great if you’re moving one place to another.

With its excellent looking stands, you’ll have a sturdy and reliable position that you can also easily adjust.

If you’re tired of cables and wires being tangle everywhere, then you won’t have to worry. Thanks to its cable managing concealer system, you’ll have an organization and clutter-free environment.

If you’re looking for a full view and an emersed experience, the AW2518HF is it. Thanks to its super thin bezel design, you’ll be able to have a fuller look. And the monitor also has a 3H anti-glare protector as well.

With its cool RGB feature, you’ll have your monitor glow to have a more immersive experience while gaming or if you’re enjoying some multimedia. Depending on the application you’re running, the colors will match with the same colors on your screen, which is a cool feature to have.

If you’re a highly competitive player and want a fast response time with 1ms and an excellent refresh rate of 240Hz, then the Alienware AW2518HF monitor will deliver this to you. Having a quick response time is essential when playing fast paced action games.

Having a great looking design, and great features with RGB lighting, and having a fast response time, the AW2518HF would be ideal for you.

If you’re a highly competitive player and want a fast response time with 1ms and an excellent refresh rate of 240Hz, then the Alienware AW2518HF monitor will deliver this to you. Having a quick response time is essential when playing fast paced action games.

Having a great looking design, and great features with RGB lighting, and having a fast response time, the AW2518HF would be ideal for you.